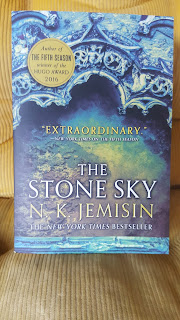 The Stone Sky by N.K. Jemisin is the 2017 third book in the Broken Sky trilogy. Each of the earlier books won a Hugo Award, and this one has been nominated. I can recommend this entire series. I tend to prefer science fiction and this is more Fantasy than I usually read, but the series is impressive -deep with character development and immersive world-building.


THE FINAL SEASON FALLS
Essun has mastered the Obelisk Gate. But halfway across the Stillness a pretender rises: Nassun. As the icy white eye of the Moon opens above the world, ancient battle lines are redrawn between mother and daughter, stone eater and orogene, slave and rebel. The destruction of humankind -or something worse- looms nigh.

The New York Times has a positive review, as does NPR, The Verge, Kirkus Reviews, and Publishers Weekly.

I have also read the first two: