A Battle of Nerves 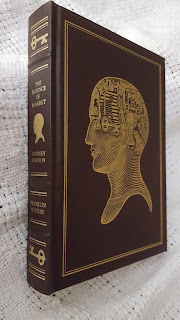 A Battle of Nerves (1931) by Georges Simenon is the first of two novels in the volume pictured above. I read a few of the Maigret books in high school and then forgot about them until I came across the several television adaptations. The Younger Son gave me this lovely book for Mother's Day, and I am glad I've rediscovered them. This book has been adapted for film and television several times, including The Man on the Eiffel Tower with Charles Laughton and as Maigret and the Head of a Man with Bruce Cremer.


Maigret had been investigating the murder of Mme. Henderson, a rich American woman, and her maid, at her house in Saint-Cloud. Despite the evidence against the main suspect, Joseph Heurtin, which earned him the death sentence, Maigret feels sure Heurtin is not the guilty party. Convinced Heurtin knows the real killer, he contrives to let the man escape...

I haven't seen it, but you can watch the Charles Laughton version (directed by Burgess Meredith) here:

I'm working my way through the entire Bruce Cremer Maigret series, as I can get the DVDs, but they don't come cheap.