The Ghosts of Belfast 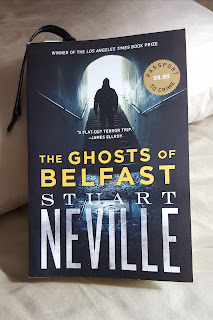 The Ghosts of Belfast is a 2009 award-winning novel by Stuart Neville, his debut novel. I picked this one up in my local bookstore because it was a new-to-me author and I've been a sucker for that "Passport to Crime" price point. What can I say.... I liked it. The main character and his "ghosts" are intriguing, and the situation he found himself in so difficult that I couldn't help but sympathize with him. You can read an excerpt here.


Northern Ireland's Troubles may be over, but peace has not erased the crimes of the past. Gerry Fegan, a former paramilitary contract killer, is haunted by the ghosts of the twelve people he slaughtered. Every night, at the point of losing his mind, he drowns their screams in drink. But it's not enough. In order to appease the ghosts, Fegan is going to have to kill the men who gave him orders.

From the greedy politicians to the corrupt security forces, the street thugs to the complacent bystanders who let it happen, all are called to account. But when Fegan's vendetta threatens to derail a hard-won truce and destabilize the government, old comrades and enemies alike want him dead.

The New York Times says it's "a first novel by Stuart Neville so bleak and despairing -“noir” in the genuine existential sense- it would rattle the composure of a saint." The Washington Post has a review. The New York Journal of Books concludes by saying, "Many readers will doubtless want to devour the entire Belfast series after experiencing the rich noir tale told in Ghosts."

Kirkus Reviews calls it "Harsh and unrelenting crime fiction, masterfully done." Publishers Weekly concludes, "This is not only an action-packed, visceral thriller but also an insightful insider’s glimpse into the complex political machinations and networks that maintain the uneasy truce in Northern Ireland."
Posted by Divers and Sundry at 4:00 AM