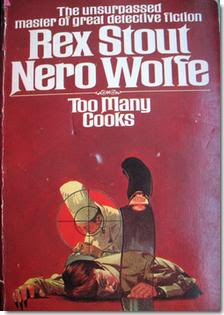 Too Many Cooks is a 1938 Rex Stout novel featuring private detective Nero Wolfe. I forgot to take a photo while I had the book so took this one from an online search. This one has numerous characters and a complex plot. It takes place in April at a retreat in West Virginia.

The name is Archie,

Archie Goodwin. I work for Nero Wolfe as secretary, bodyguard, office manager, assistant detective -and fall-guy. When the world's greatest chefs invited Wolfe to a cooking conclave in West Virginia, he managed to heave his bulk out of his oversized arm chair and leave his orchids and his office to attend the gourmet gathering. It was worth the trip, until one of the chefs got a knife in his back....

At least three master chefs had sworn to kill Laszio -and with sufficient personal reason. Had one of them turned butcher and carved him up?

There were too many motives, too few clues, and not enough time to solve one of the most bizarre puzzles in Nero Wolfe's entire career.

There is some controversy about the use of words we would today consider racial or ethnic slurs. Wolfe himself treats everyone with respect. The L A Review of Books discusses it in an article on culinary mysteries, calling it a "masterpiece". There are several reviews referenced here.
Posted by Divers and Sundry at 4:00 AM