The House of Mirth 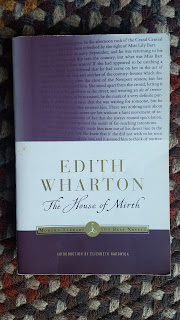 The House of Mirth, a 1905 novel by Edith Wharton, is a book I thought I had read long since but had never actually read. Odd, how some books seem familiar somehow. Better late than never, I've come to it wishing I had read it sooner. It's a sad story of a woman whose life doesn't turn out well. You can't help but see how much of it is her own fault, but she had plenty of "help" from friends, family, and society to ensure her success on any terms would be difficult.

Lily Bart knows that she must marry -her expensive tastes and mounting debts demand it- and, at twenty-nine, she has every artful wile at her disposal to secure that end. But attached as she is to that social world of her wealthy suitors, something in her rebels against the insipid men whom circumstances compel her to charm.

"Why must a girl pay so dearly for her least escape," Lily muses as she contemplates the prospect of being bored all afternoon by Percy Grice, dull but undeniably rich, "on the bare chance that he might ultimately do her the honor of boring her for life?" Lily is distracted from her prey by the arrival of Lawrence Selden, handsome, quick-witted, and penniless. A runaway bestseller on publication in 1905, The House of Mirth is a brilliant romantic novel of manners, the book that established Edith Wharton as one of America's greatest novelists.

The Guardian says, "The novel was serialised in Scribner's Magazine in 1905 and aspects of it now seem old fashioned but its depiction of social mores and their influence gives it universal resonance." NPR calls it a "rich, tragic tale". The New York Review of Books calls it Wharton's "triumph".
Posted by Divers and Sundry at 4:00 AM