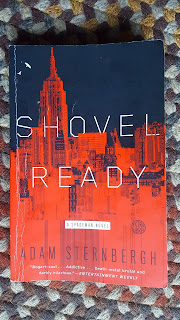 Shovel Ready, Adam Sternbergh's 2014 debut novel, is first in a series about a near-future hitman in a post-nuclear disaster New York. You can read an excerpt via the author's web site. It was a bit terse in style for my liking, though it's also nice to have something to read that's in a different style. I enjoyed the way the main character was written, and will read the next in the series (there are only the two books so far) when I come across it. There is a planned film starring Denzel Washington, which appears to be in development hell.

From early in the book:

A reporter buddy once told me that in newspapers, when you leave out some important piece of information at the beginning of the story, they call it burying the lede.

So I just want to make sure I don't bury the lede.

Though it wouldn't be the first thing I've buried.

Spademan used to be a garbageman. That was before the dirty bomb hit Times Square, before hs wife was killed, and before the city became a blown-out shell of its former self.

In a near-future New York City split between those who are wealthy enough to "tap in" to a sophisticated virtual reality and those who are left to fend for themselves in the ravaged streets, Spademan chose the streets. When his latest client hires him to kill the daughter of a powerful evangelist, he must navigate between these two worlds -the wasteland reality and the slick fantasy- to finish his job, clear his conscience, and make sure he's not the one who winds up in the ground.

The Guardian calls it "as lean and muscular a noir thriller as I have read in a long while". The LA Times has an interview with the author. The Atlantic describes it as a "propulsive, aggressively paced novel" and shares an interview with The Wire.

UR Chicago has a negative review, complaining about the dressing up of a tired story with gimmicks. Slate has an interview with Sternbergh.

Kirkus Reviews concludes, "Telegraphic in style, this book is tough, sordid and definitely not for every taste." Publishers Weekly describes it as "a low-rent Raymond Chandler noir told in the style of very late James Ellroy." Entertainment Weekly says, "You finish this book ready for more of his scared new world."

SF Book closes by saying it "is different enough to warrant attention, an unusual protagonist and a story that manages to avoid cliche helps, as does the quality of the writing. Recommended." io9 has some criticisms of the writing but concludes:

The good news is, the character of Spademan and his snarky observations do carry you forward, and there are enough revelations towards the end that feel both shocking and supported by the story, that Shovel Ready still winds up feeling like a great read, and its world still manages to hold you in its dirty clutches until the violent, fascinating conclusion.