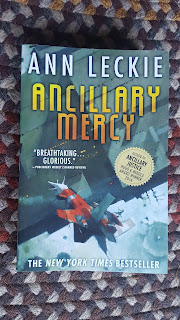 Ancillary Mercy is the third book in Ann Leckie's "Imperial Radch" trilogy. These really must be read in order, as they are a clear and straight narrative from the beginning of the first book to end of the last. Mercy won the Locus Best Novel award. Science Fiction is my favorite genre, and space opera is my favorite sub-genre. This series fits the bill beautifully, but it's not your father's space opera. I thoroughly enjoyed it, with its unusual characters, and have passed it along with my high recommendation to The Younger Son.

Ancillary Mercy is the stunning conclusion to
the trilogy that began with Ancillary Justice,
the only novel ever to win the Hugo, Nebula,
and Arthur C. Clarke awards.

For a moment, things seemed to be under control for Breq, the soldier who used to be a warship. Then a search of Athoek Station's slums turns up someone who shouldn't exist, and a messenger from the mysterious Presger empire arrives, as does Breq's old enemy, the divided, heavily armed, and possibly insane Anaander Mianaai -ruler of an empire at war with itself.

NPR closes by saying that this book "earns the credit it's received: As a capstone to a series that shook genre expectations, as our closing installment of an immersively realized world, and as the poignant story of a ship that learned to sing." Kirkus Reviews gives it a positive review and says, " Leckie creates a grand backdrop to tell an intimate, cerebral story about identity and empowerment. She devotes as much attention to the characters’ personal relationships and their mental and emotional difficulties as she does to the wider conflict." Publishers Weekly opens with this: "The breathtaking conclusion to Leckie’s much-lauded Imperial Radch trilogy (Ancillary Justice; Ancillary Sword) lives up to the promise and expectations of the earlier books."


There’s perhaps no science-fiction series as descriptive of our current political and cultural moment or as insistent that we open our eyes to it as Ann Leckie’s Hugo- and Nebula-winning Imperial Radch trilogy. In Ancillary Justice, Ancillary Sword, and the newly published Ancillary Mercy, Leckie imagines a space opera thousands of years in the future and thousands of light years away—a perfect vantage point from which to consider how we humans imagine ourselves right now.

SF Signal calls it "Emotionally Complex, Compelling". The Eyrie gives it a positive review, a 10 out of 10 rating, and concludes, "This is simply the best SF series I've read in a long time."