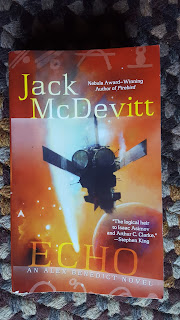 Echo (2010), by Jack McDevitt, is the 5th book in the ongoing Alex Benedict series. More than one reviewer describes the series as "cozy" science fiction, and I like that. I felt like there was a bit of a cop-out at the end, but I almost felt like the author liked one of the characters too much to do that to her, so I sympathized with the decision. I generally liked this one. But still... That decision made some of the earlier parts of the book less comprehensible to me. I do like the characters, and the books are an easy read in a world I enjoy. You wouldn't have to read them in order, but I found the 2nd book the weakest link, so don't start there.

During eight thousand years of star travel, humans have encountered only one alien species. Sunset Tuttle spent a lifetime looking for others in vain.

Twenty-five years after Tuttle's death, Alex Benedict makes an astonishing discovery: a stone tablet inscribed with cryptic symbols, now in the possession of Tuttle's one-time lover Rachel Bannister is determined to decipher its secret -one Bannister doesn't want revealed. Could it be that Tuttle's obsessive quest was successful? If so, why is the woman hiding the truth? Stranger still, why did Tuttle never admit to his findings?

Now Benedict and his assistant, Chase Kolpath, embark on their own voyage of discovery -for answers as startling as they are infinitely dangerous.

It's tempting to describe McDevitt as cozy science fiction. There's a bit of danger, a bit of suspense, but one is fairly certain that everything will work out in the end and the reader will leave the book knowing the solutions to most of the mysteries raised without having to work very hard at understanding the society or the puzzle.

SF Site says, "When McDevitt brings out his final revelation, it seems almost anticlimactic, but it doesn’t really matter. By that point, McDevitt has drawn the reader with with his storytelling and characters". Locus Online concludes with this: "perhaps the biggest surprise is how McDevitt manages to make the odd coupling of the cozy and the cosmic into effective and moving SF."

I've read the series so far: