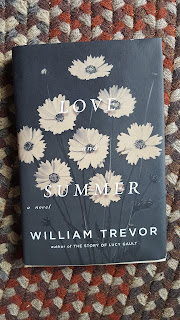 Love and Summer is a 2009 novel (his 14th) by William Trevor. I pick up his books wherever I find him. I like the way he writes. He carries me along with the story, and it's hard to put the books down.

A haunting love story about the choices of the heart from the acclaimed Irish master -his first novel since the Booker-shortlisted The Story of Lucy Gault.

Ellie Dillaham is a shy orphan girl from the hill country, married to a man whose life has been blighted by an unspeakable tragedy. Ellie lives a quiet life in the small Irish town of Rathmoye until she meets Florian Kilderry, a young photographer preparing to leave Ireland and his past forever. The chance intersection of these lost souls sets in motion a poignant love affair that requires Ellie to make an impossible choice.

In spare, exquisite prose, William Trevor delves into the circumscribed lives of the people of Rathmoye, exploring their passions and frustrations during one long summer.

The New York Times concludes a positive, spoiler-filled review with this: "a reader will have his heart in his mouth for the last 50 pages. And when that heart settles back down, it will be broken and satisfied." Kirkus Reviews opens with this: "The poignancy of life worn down at the elbows, Trevor’s signature note, gently animates another masterpiece." The LA Times has a positive review that opens, "That William Trevor has not yet received the Nobel Prize in Literature strikes me as a shame."

The Telegraph closes by saying,

The gentle pace of Trevor’s writing, as deceptively still as the pace of life in Rathmoye itself, can give the impression that this is a novel in which very little happens. It is not so. Behind the silences, the half-articulated feelings, the resignation, there unfolds a series of wrenching human dramas, which Trevor, who is a great moralist as well as an exquisite stylist, depicts with kindness and beautiful delicacy but also a kind of implacable wisdom.

The mystery of Love and Summer is how, despite the heaping up of so much tragic stasis and the persistence of so many specters, the novel winds up being so alive—hungry for life, not choked with death. This is a question that could be asked about a lot of Trevor's work, ... There is an uncommon precision in Trevor's language that allows him to evoke in a sentence the refractory paradoxes of a personality ... and to move in and out of character with feline subtlety. He marks out in very small shifts of tone the degrees of intimacy and distance that create the illusion that people who did these things lived and breathed.

But the other reason Trevor's creations live and breathe is that, like a lonely God in the act of Creation, he loves them into being.

The Washington Post also has a positive review, saying,

When Trevor chooses to leave the inner mind of a character, he lingers on aspects of the physical world, and in this way we live where these people do. He lingers over the way that Miss Connulty prepares food for her overnight lodgers. He lingers on Ellie's own domestic duties, and on the dogs that are part of the Dillahan farm. He lingers on the moments that tell us the summer is moving by. Mostly, and most important, what Trevor does is make us believe and care.