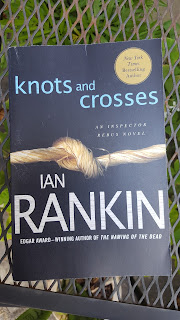 Knots and Crosses (1987) is the first book in the Inspector Rebus detective series by Ian Rankin. I read Resurrection Men, which is 13th in the series, because it won the Edgar Award for best novel. Because I enjoyed it I decided to start picking up more in the series, but then I forgot to do it. I recently came across this in my local book store and remembered. I'll try to read them in order, but I'm not going to obsessive about it.

I came across a word in this book -twice, actually- that I'd never heard before: "outwith".

Detective John Rebus's city is being terrorized by a baffling series of murders... and he's tied to the maniac by an invisible knot of blood. As the ghoulish killings mount and the tabloid headlines scream, Rebus cannot stop the feverish shrieks from within his own mind. Because he isn't just one cop trying to catch a killer -he's the man who's got all the pieces to the puzzle.

Kirkus Reviews has a positive review.

I read Resurrection Men way back in 2007.
Posted by Divers and Sundry at 4:00 AM