Death in a Strange Country 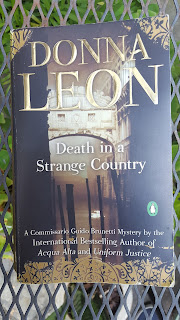 Death in a Strange Country (1993), by Donna Leon, is 2nd in the Commissario Guido Brunetti mystery series. I am picking these up as I come across them and am enjoying the atmosphere of the Venetian setting, the characters' professional and family lives, and the fascinating plots.


Early one morning Commissario Guido Brunetti of the Venice Police confronts a grisly sight when the body of a young man is fished out of a fetid canal. All the clues point to a violent mugging, but for Brunetti the motive of robbery seems altogether too convenient. When something is discovered in the victim's apartment that suggests the existence of a high-level conspiracy, Brunetti becomes convinced that somebody, somewhere, is taking great pains to provide a ready-made solution to the crime.

quotes, beginning with one that features coffee for inclusion in today's T Tuesday gathering over at Bleubeard and Elizabeth's blog:


The steamy warmth of the bar was comforting and familiar, as were the smells of coffee and pastry. A man and woman standing at the counter glanced at the uniformed men, then went back to their conversation. Brunetti asked for espresso, Vianello for caffè corretto, black coffee with a substantial splash of grappa. When the barman put their coffees in front of them, both spooned in two sugars and cradled the warm cups in their hands for a moment.

Vianello downed his coffee in one gulp, set the cup back on the counter, and asked, "Anything else, sir?"

It would have been easy for Brunetti to grow indifferent to the beauty of the city, to walk in the midst of it, looking and not really seeing. But then it always happened: a window he had never noticed before would swim into his ken, or the sun would gleam in an archway, and he would actually feel his heart tighten in response to something infinitely more complex than beauty. He supposed, when he bothered to think about it, that it had something to do with language, with the fact that there were fewer than eight thousand people who lived in the city, and perhaps with the fact that he had gone to kindergarten in a fifteenth-century palazzo. He missed the city when he was away from it, much in the same way he missed Paola [his wife], and he felt complete and whole only while he was here.