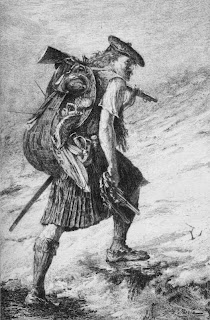 I'm taking the 2015 Read Harder challenge, but I'm determined not to buy any books to meet it. I knew I certainly didn't want to buy a Young Adult book, as I don't generally read them. It's not that I've never read them, as I was a young adult once and was an avid reader then, and as an older adult I have read the Harry Potter books; but I don't seek out that genre. Looking at Wikipedia for a book that would count, that I had not already read, and that would be available online, I came across Waverley. This is by Sir Walter Scott. Wikipedia includes it in their article on Young Adult Fiction. Written in 1814 -just over 200 years ago- it can be read online at Gutenberg.org or at Adelaide.edu.au.

Waverley was wildly successful when it came out and was widely praised at the time. Jane Austen said,

Walter Scott has no business to write novels, especially good ones. It is not fair. He has Fame and Profit enough as a Poet, and should not be taking the bread out of other people's mouths. I do not like him, and do not mean to like Waverley if I can help it – but fear I must.

These days, with Austen so widely read, Waverley might be something that gains more bookshelf space. The Guardian calls it "a strangely liminal novel". The BBC calls it "one of the most significant books of the nineteenth-century" and says it "marks the establishment of the genre of the historical novel". PBS has an article marking the 200th anniversary.

I'm told "young adults" are no longer capable of reading and understanding Scott's prose; but I read some of his work as a teenager and enjoyed it, so I'm assuming it can still be done. It's a tale of action and adventure after all.

Here's a section from a battle late in the book [obvious spoilers, but the book was written in 1814]:

'Down with your plaid, Waverley,' cried Fergus, throwing off his own; 'we'll win silks for our tartans before the sun is above the sea.'

The clansmen on every side stript their plaids, prepared their arms, and there was an awful pause of about three minutes, during which the men, pulling off their bonnets, raised their faces to heaven and uttered a short prayer; then pulled their bonnets over their brows and began to move forward, at first slowly. Waverley felt his heart at that moment throb as it would have burst from his bosom. It was not fear, it was not ardour: it was a compound of both, a new and deeply energetic impulse that with its first emotion chilled and astounded, then fevered and maddened his mind. The sounds around him combined to exalt his enthusiasm; the pipes played, and the clans rushed forward, each in its own dark column. As they advanced they mended their pace, and the muttering sounds of the men to each other began to swell into a wild cry.

At this moment the sun, which was now risen above the horizon, dispelled the mist. The vapours rose like a curtain, and showed the two armies in the act of closing. The line of the regulars was formed directly fronting the attack of the Highlanders; it glittered with the appointments of a complete army, and was flanked by cavalry and artillery. But the sight impressed no terror on the assailants.

'Forward, sons of Ivor,' cried their Chief, 'or the Camerons will draw the first blood!' They rushed on with a tremendous yell.

The rest is well known. The horse, who were commanded to charge the advancing Highlanders in the flank, received an irregular fire from their fusees as they ran on and, seized with a disgraceful panic, wavered, halted, disbanded, and galloped from the field. The artillery men, deserted by the cavalry, fled after discharging their pieces, and the Highlanders, who dropped their guns when fired and drew their broadswords, rushed with headlong fury against the infantry.

It was at this moment of confusion and terror that Waverley remarked an English officer, apparently of high rank, standing, alone and unsupported, by a fieldpiece, which, after the flight of the men by whom it was wrought, he had himself levelled and discharged against the clan of Mac-Ivor, the nearest group of Highlanders within his aim. Struck with his tall, martial figure, and eager to save him from inevitable destruction, Waverley outstripped for an instant even the speediest of the warriors, and, reaching the spot first, called to him to surrender. The officer replied by a thrust with his sword, which Waverley received in his target, and in turning it aside the Englishman's weapon broke. At the same time the battle-axe of Dugald Mahony was in the act of descending upon the officer's head. Waverley intercepted and prevented the blow, and the officer, perceiving further resistance unavailing, and struck with Edward's generous anxiety for his safety, resigned the fragment of his sword, and was committed by Waverley to Dugald, with strict charge to use him well, and not to pillage his person, promising him, at the same time, full indemnification for the spoil.

On Edward's right the battle for a few minutes raged fierce and thick. The English infantry, trained in the wars in Flanders, stood their ground with great courage. But their extended files were pierced and broken in many places by the close masses of the clans; and in the personal struggle which ensued the nature of the Highlanders' weapons, and their extraordinary fierceness and activity, gave them a decided superiority over those who had been accustomed to trust much to their array and discipline, and felt that the one was broken and the other useless. Waverley, as he cast his eyes towards this scene of smoke and slaughter, observed Colonel Gardiner, deserted by his own soldiers in spite of all his attempts to rally them, yet spurring his horse through the field to take the command of a small body of infantry, who, with their backs arranged against the wall of his own park (for his house was close by the field of battle), continued a desperate and unavailing resistance. Waverley could perceive that he had already received many wounds, his clothes and saddle being marked with blood. To save this good and brave man became the instant object of his most anxious exertions. But he could only witness his fall. Ere Edward could make his way among the Highlanders, who, furious and eager for spoil, now thronged upon each other, he saw his former commander brought from his horse by the blow of a scythe, and beheld him receive, while on the ground, more wounds than would have let out twenty lives. When Waverley came up, however, perception had not entirely fled. The dying warrior seemed to recognize Edward, for he fixed his eye upon him with an upbraiding, yet sorrowful, look, and appeared to struggle, for utterance. But he felt that death was dealing closely with him, and resigning his purpose, and folding his hands as if in devotion, he gave up his soul to his Creator. The look with which he regarded Waverley in his dying moments did not strike him so deeply at that crisis of hurry and confusion as when it recurred to his imagination at the distance of some time. [Footnote: See Note 33.]

Loud shouts of triumph now echoed over the whole field. The battle was fought and won, and the whole baggage, artillery, and military stores of the regular army remained in possession of the victors. Never was a victory more complete. Scarce any escaped from the battle, excepting the cavalry, who had left it at the very onset, and even these were broken into different parties and scattered all over the country. So far as our tale is concerned, we have only to relate the fate of Balmawhapple, who, mounted on a horse as headstrong and stiff-necked as his rider, pursued the flight of the dragoons above four miles from the field of battle, when some dozen of the fugitives took heart of grace, turned round, and cleaving his skull with their broadswords, satisfied the world that the unfortunate gentleman had actually brains, the end of his life thus giving proof of a fact greatly doubted during its progress. His death was lamented by few. Most of those who knew him agreed in the pithy observation of Ensign Maccombich, that there 'was mair tint (lost) at Sheriff-Muir.' His friend, Lieutenant Jinker, bent his eloquence only to exculpate his favourite mare from any share in contributing to the catastrophe. 'He had tauld the laird a thousand times,' he said, 'that it was a burning shame to put a martingale upon the puir thing, when he would needs ride her wi' a curb of half a yard lang; and that he could na but bring himsell (not to say her) to some mischief, by flinging her down, or otherwise; whereas, if he had had a wee bit rinnin ring on the snaffle, she wad ha' rein'd as cannily as a cadger's pownie.'

Such was the elegy of the Laird of Balmawhapple.