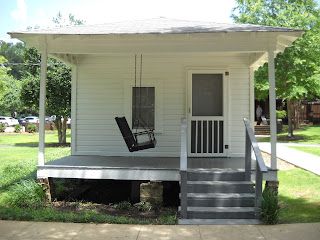 When we went back to Tupelo to look at veils to go with The Daughter's wedding dress we had some time to enjoy the tourist attractions. Tupelo is the birthplace of Elvis Presley, and they have a site that marks the spot. The house pictured above is the actual house where Elvis was born, but historic preservation doesn't seem to be their goal. The house was built without electricity, but they've added lights and air for the comfort of their staff and as a result have lost entirely what the house actually looked like on the inside when Elvis lived there. You do get a sense of the size of the place. It was a 2 room house, and it still has just the 2 rooms. It's furnished in period-appropriate style. There's a museum on the grounds that is filled with document facsimiles, period photos, and items similar to objects that would've been in use during the time period Elvis lived in Tupelo. There was a woman from Tupelo who had some contact with the Presleys over the years, and there are objects she had given the family when they lived at Graceland which are displayed here. When we toured Graceland we heard no mention of this woman, but the Tupelo museum has an entire room devoted to her.

The museum has an enlarged photo of church members standing in front of the church Elvis' family belonged to, but the Presley family isn't in the photo. The church building itself is on the grounds: 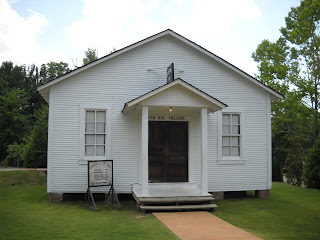 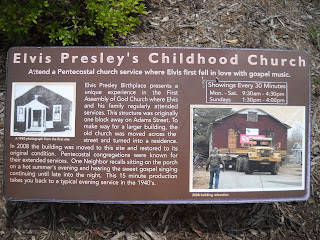 and they have a video presentation of parts of a re-enactment of what they think the worship services were like when the Presleys belonged there, with imitation-child-Elvis singing during one part of it. The Daughter and I didn't like this part, both because we found it too long -much too long- and because we thought it a bit disrespectful somehow. We'd have preferred being able to just go into the building to see it without the drama.

We liked the life-sized statue of Elvis at 13: 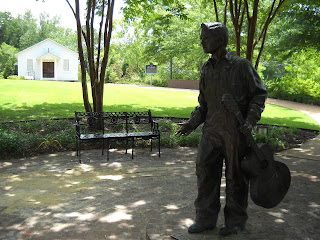 and we thought the Fountain of Life was lovely: 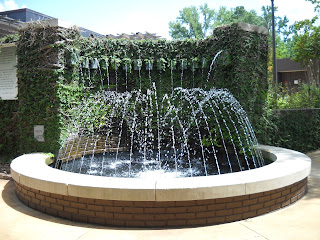 The staff person who took our tickets at the house told us she had never been to Graceland and would never go there because she said their ticket prices were too high and she was afraid of crime in Memphis. We can't help but see her as being a bit precious with this. We wanted to tell her that for people interested in Elvis, Tupelo was skippable but Graceland was a must-see. In fact, we think having been to Graceland should be a job requirement for any birthplace site employee.

We were told this story of the birthplace site: In the mid-50s, Elvis found out his parents' old house was for sale, and he approached the Tupelo city fathers about buying it and turning the space into a park for the poorer kids who lived in that part of town. He donated the proceeds of 2 local concerts to the cause. We couldn't help but notice it's not a park at all suitable for children to play in. There's no playground equipment and no open space for play and nothing free to do except view a car that is similar to the one Elvis and his family drove when they moved from Tupelo to Memphis when Elvis was a child. We wonder how he would've felt about this use of property he specifically intended to benefit kids from his old neighborhood. Maybe he knew and approved this. I don't know. I can't find any information on whether or not it was actually turned into a park, and if so, when it was changed into the tourist attraction it now is.

Elvis' first public appearance (if you don't count church -which we personally do not count as a "performance" or "public appearance") was at the local fair, and they have a great statue in that park downtown (where there is playground equipment and open space) commemorating him: 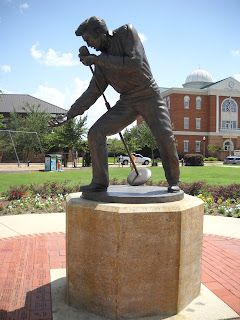 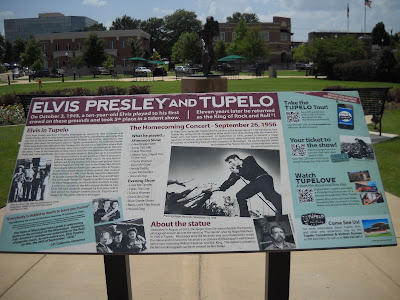 All-in-all the Elvis sites were worth a day trip down from Memphis, but Graceland is the trip I would recommend.