The Tale of the Two Brothers 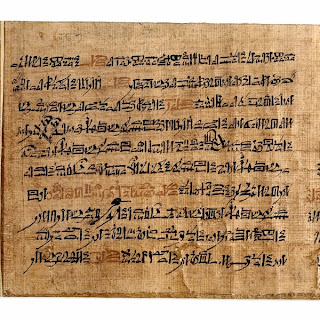 The 2015 Read Harder challenge has on its list "A book by an author from Africa". In my effort to avoid buying any books for no other reason than needing them for this challenge, I see The Tale of the Two Brothers available online here, or here, or here. It is an ancient Egyptian story -a fairy tale- of two brothers and the woman who comes between them. Wikipedia says,

There are several themes present in the Tale of Two Brothers that are significant to ancient Egyptian culture. One of these is kingship. The second half of the tale deals largely with Egyptian ideas of kingship and the connection between divinity and the pharaoh....There are also several references to the separation of Egypt into two lands. Throughout ancient Egyptian history, even when the country is politically unified and stable, it is acknowledged that there are two areas

BritishMuseum.org calls it "a style of story that became popular in the New Kingdom (1550-1070 BC). Similar to a folk tale, the story is less formal in style than those of the Middle Kingdom (2040-1750 BC). It has very human characters whose relationships are very realistic, though many of the events that take place in the story are pure fantasy."

Once upon a time there were two brothers of the same moth er and father. Anubis was the name of the elder and Batan that of the younger. Now Anubis was married and had a house while his younger brother was his servant. He at tended to the clothes, and followed the cattle on the pasture, and did the ploughing and the threshing; in fact he did everything connected with the farm. He was, indeed, an excellent workman and none could be found like him in the whole country. He was, besides, a good brother.

Now for a long time this younger brother was tending the cattle according to his daily wont, returning home every evening, having on his back the herbs of the field that he h:id gathered while on the pasture, and setting them down before his older brother who passed the time with his wife in eating and drinking. Then he lay down to sleep in the stable with his cattle as usual. The next day he would bake loaves of bread on the fire and place them before his older brother and take some loaves to the field. Here he tended his cattle, pasturing them and walking behind them. But they would tell him where there were good herbs growing, and he would listen to all they told him and drive them where they could find the good herbs they loved so much. His cattle, consequently, thrived under his hands and their young multiplied greatly.

Now when the time of ploughing arrived the older brother said to him: "Come, let us take our yoke of oxen and get ready for ploughing: for the soil is beginning to appear (after the inundation) and is now in excellent condition for ploughing. Do yon, therefore, go to the field with seed. Tomorrow we will begin to plough." Thus he said, and his younger brother made all the arrangements with which his older brother had charged him. On the following day they went out on the field with their yoke of oxen and began to plough. They were quite cheerful at their work and not idle for a moment.

Now after a few days they were again at work in the field when the older brother came to the younger and said: "Run and fetch us some seed from the town!" Then he went and found the wife of his older brother sitting in the house and arranging her hair and said to her: "Come, give me some seed, that I may take it to the field; for my older brother has sent me saying: 'Run, and don't be long about it!'" But she answered him: "Oh, go yourself! Open the bin and take as much as you need. I am afraid, lest my tresses fall to the ground." So the young man went to the stable and took a big basket, which he filled with as much seed as he needed and put on his shoulder full of barley and spelt. But when he came back with it, his brother's wife asked him: "How much have you on your shoulder?" He answered: "Of spelt I have three bushels and of barley two, making in all five bushels that I have on my shoulder." That was all he said. But she replied: "You are, indeed, very strong. I have for some time already been admiring your strength." And her heart grew desirous, for she knew his strength.