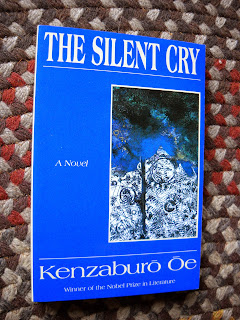 The Silent Cry is a 1967 novel by Nobel Prize-winning Japanese author Kenzaburo Oe. I struggled with this book, putting it down several times to pick up again later. It's bleak, and I didn't find it engaging at any level. I feel almost guilty about it, since it gets such praise, and I know better informed readers might get more out of the experience. I finished it out of sheer stubbornness.

The Silent Cry traces the uneasy relationship between two brothers who return to their ancestral home, a village in densely forested western Japan. While one brother tries to sort out the aftereffects of a friend's suicide and the birth of a retarded son, the other embarks on a quixotic mission to incite an uprising among the local youth. Oe's description of this brother's messianic struggle to save a disintegrating local culture and economy from the depredations of a Korean wheeler-dealer called "The Emperor of the Supermarkets" is as chillingly pertinent today as it was when it was first published in 1967. Powerful and daring, The Silent Cry is a thoroughly compelling classic of world literature.

Oe is dense, analytical, with a highly modern self-consciousness, though there's real nostalgia here for the dying traditions of pre-Westernized supermarket culture. A picture of fragmenting identity and social breakdown as brutalizing as the 20th century itself.