The Pursuit of Love 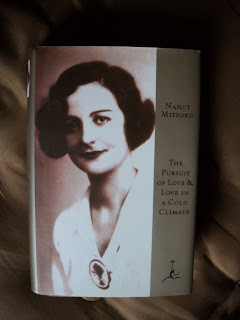 The Pursuit of Love is a semi-autobiographical 1945 novel by Nancy Mitford. To be honest, I'd never heard of this and only bought it because it was $5.00 fiction in a Modern Library edition with a dust jacket. I'm a sucker for hardcover Modern Library fiction. I love this book! A story of everyday people in England during the period leading up to WW2, with their quirks and class differences. I'm sure I'll read this one again. It's a quick read and very enjoyable.

The Radlett family, which achieved fame in these two witty and mocking stories of the English country nobility, was clearly modeled on Nancy Mitford's own. Her father, David Ogilvy Freeman-Mitford, second Lord Redesdale, is clearly recognizable in the terrifying Uncle Matthew, who hunts his children with bloodhounds, grinds down several sets of dentures a year, and believes that "abroad is a sewer." Many people have recognized Nancy Mitford and her sisters in the fictional Radlett children. Although this recognition has added spice to the two novels, they are highly entertaining on their own merits. The Pursuit of Love is the story of Linda Radlett, who, after two unsuccessful marriages, finally finds love (as Nancy Mitford herself did) in Paris.

The Guardian reviewer reads it every year and closes with this: "The lacerating ironies of the very posh have never seemed so life affirming." The Lit Bitch used it to stave off Downton Abby withdrawal and says, "What struck me most about the book was the tone of the narrator and the characters. Bizarre, dramatic, and emotional situations were described with such a detached urbanity and dry wit. Mitford’s style of writing really captures the absurdity of life in an amusing way, and I was often struck by how modern her writing felt."

The Telegraph has an examination of it which says,

Years of pressing the book on friends have taught me some caution, however. Readers who appreciate the novel tend to love it with a dotty passion; others, who escape the enchantment, are apt to despise it with almost equal fervour. The decisive factor, in either case, seems to be the voice – the unmistakable Mitford trill, in whose light, bright cadences an entire hard-to-shock and easy-to-bore view of life is made manifest. This voice is not actually a voice, of course; it is the illusion of a voice, painstakingly created in prose.