The Curve of the Earth 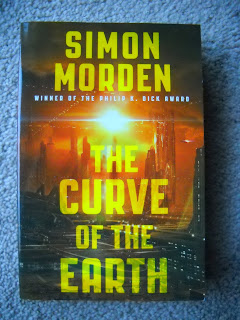 The Curve of the Earth (2013) is the 4th book (and most recent) in the Metrozone series by Simon Morden and is the only book by this author that I've read. To be honest, if I'd realized it wasn't intended as a stand-alone but was instead the last in a series I'd never have picked it up. I didn't find that out, though, until I started writing up this post. It functioned fine for me as a stand-alone novel, and I'd recommend it as one. I enjoyed it, but -knowing now that it's the last one- I won't go back and pick up the others. If others follow, I'll definitely read them. You can read the first chapter at the author's website here.

Welcome to the Metrozone - post-apocalyptic London of the Future, full of homeless refugees, street gangs, crooked cops and mad cults. Enter Samuil Petrovitch: a Russian emigre with a smart mouth, a dodgy heart and a dodgier past. He's brilliant, selfish, cocky and might just be most unlikely champion a city has ever had. Armed with a genius-level intellect, extensive cybernetic replacements, a built-in AI with god-like capabilities and a plethora of Russian swearwords, he's saved this city from ruin more than once. He's also made a few enemies in the process -Reconstruction America being one of them. So when his adopted daughter Lucy goes missing, he's got a clue who's responsible. And there's no way he can let them get away with it.

my rightness is entirely independent of their opinion. Information wants to be free, to be known by as many minds as possible and achieve meaning. It's revolution -the emancipation of data.

The Guardian calls it "British sci-fi at its hard-boiled best". Strange Horizons gives it a positive review. SF Revu says, "I suspect that Simon Morden would have a hard time making a trip to the grocery store boring, at least if it's Petrovitch doing the shopping, and The Curve of the Earth offers a wild dogsled ride from one end to the other in true Metrozone fashion."
Posted by Divers and Sundry at 4:00 AM