Afternoon Tea (On the Terrace) 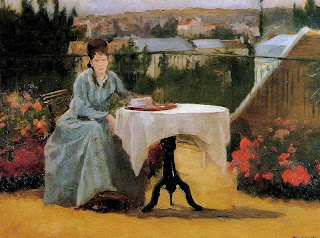 also called On the Terrace is an 1875 painting by Eva Gonzales, a French Impressionist painter, who died of an embolism on May 6 in 1883 at the age of 34 two weeks after giving birth. She was the only formal student of Édouard Manet.

The New York Times says, "Her life's work was small -perhaps 90 paintings- but those on display at the Marmottan have prompted critics to wonder what masterpieces she might have produced had she lived longer." ArtExperts says, "Some of her favourite subjects were Theatre Goers, and women relaxing outside. It is said that it was her bright colours, and soft brushstrokes which made her paintings successful."

Although little is really known about Gonzales, that is not to say she was without talent; she is definitely a celebrity among female artists, but unfortunately not as well known as her fellow male Impressionists. She possessed just as much creativity and observational power, and her work can be compared to the likes of Edgar Degas...

I think if I had that lovely flower garden to have tea in I'd look a bit more content, and I find myself wondering what this woman is thinking. I wonder if she may be worried about something.

You can see more of Eva Gonzales' paintings at The Athenaeum and at WikiArt.

Please join the T(ea) Tuesday gathering at Bleubeard and Elizabeth's blog, where Elizabeth is talking about the history of Cinco de Mayo.
Posted by Divers and Sundry at 4:00 AM