The Last Talk with Lola Faye 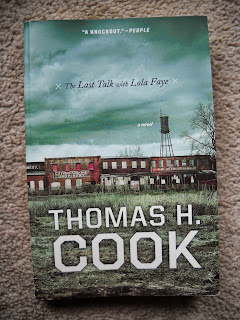 The Last Talk with Lola Faye is a mystery by Thomas H. Cook. I enjoyed his award-winning The Chatham School Affair. I've also read and enjoyed The Fate of Katherine Carr, but I haven't written a blog post on it yet. This one is fascinating, as the story comes out after two people come together and discuss old times over drinks. The past is never the past, and nothing is quite what you thought it was. The book holds out the hope of redemption.

There may be something about sharing a drink that encourages the sharing of confidences. I'm linking this post to Bleubeard and Elizabeth's T(ea) Tuesday link gathering.

Middling historian Lucas Paige visits St. Louis to give a sparsely attended reading —nothing out of the ordinary. Except among the yawning attendees is someone he did not expect: Lola Faye Gilroy, the “other woman” he has long blamed for his father’s murder decades earlier.

Reluctantly, Luke joins Lola Faye for a drink. As one drink turns into several, these two battered souls relive, from their different perspectives, the most searing experience of their lives. Slowly but surely, the hotel bar dissolves around them and they are transported back to the tiny southern town where this defining moment—a violent crime of passion—is turned in the light once more to reveal flaws in the old answers. As it turns out, there is much Luke doesn't know. And what he doesn't know can hurt him. Trapped in an increasingly intense emotional exchange, and with no place to go save back into his own dark past, Luke struggles to gain control of an ever more threatening conversation, to discover why Lola Faye has come and what she is after —before it is too late.


"It's the bad stuff you mean to do that matters... That's the stuff you can't get rid of."

"Life's about how bad luck can just take over and change everything."

Mysterious Reviews closes a positive review with this:

The Last Talk with Lola Faye is a perfectly paced novel in the tradition of a gothic thriller, but also a somewhat demanding one, in that information is not always presented in a linear manner, that, like any extended conversation, often goes off on tangents before returning to the central subject, sometimes in a different place and time … and state of mind.

Kirkus Reviews calls it "An improbable tale slow to gather momentum, but darkly powerful in the end". Publishers Weekly calls it a "tightly coiled, intellectual drama".
Posted by Divers and Sundry at 4:00 AM