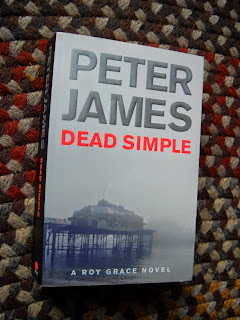 Dead Simple is a 2005 mystery novel by Peter James. It's first in the ongoing Roy Grace series. This was a quick, easy read, with interesting characters and a sympathetic detective. The plot had little in it to suit me, but I think the detective is promising. I'll pick up the next one in the series when I see it and try it on for size.

It was meant to be a harmless stag night prank. A few hours later four of his best friends are dead and Michael Harrison has disappeared. With only three days to the wedding, Detective Superintendent Grace - a man haunted by the shadow of his own missing wife - is contacted by Michael's beautiful, distraught fiancée, Ashley Harper. Grace discovers that the one man who ought to know Michael Harrison's whereabouts is saying nothing. But then he has a lot to gain - more than anyone realizes. For one man's disaster is another man's fortune... Dead simple...

It's a page-turner in the best sense of the word where you'll find yourself turning the pages at the same speed as the mouse's legs rotate in the Tom and Jerry cartoon. And ostensibly it's a police procedural featuring a faintly flawed hero who isn't a super-cop. But there's a heavy dash of suspense and just a soupcon of supernatural to help the mix along.

Eurocrime says, "The book's plot twists and turns, it is often far fetched but always gripping, and keeps you involved right to the end." Kirkus Reviews likes it at first but calls the last quarter of the book "incredible" concluding, "Three-quarters of a great suspenser that doesn’t know when to quit."
Posted by Divers and Sundry at 4:00 AM