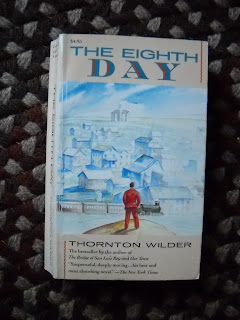 The Eighth Day is the 1967 National Book Award-winning novel by Thornton Wilder. I've had this book on my shelf for ages. I read it now, thinking it'd be suitable for the 2015 Read Harder challenge as "A book by or about someone that identifies as LGBTQ" only to discover that there's some question about Wilder's sexual orientation. *sigh* I honestly thought he was gay, and some folks claim he was; but it's not a settled thing. The book itself was a disappointment, so I lost out all the way around. I thought the book was a classic, and some folks claim it is; but that's not a settled thing either. Hmmm...

I've decided the one settled thing about this is that I won't be finishing the book. I've reached a point in my life where I no longer hope to live long enough to read all the good books. I'm not persisting with this one.

In the early summer of 1902, scandal strikes a small mining town in Illinois. A respected family man, John Ashley, stands trial for the cold-blooded murder of His best friend, Breckenridge Lansing. Speculations race through the town about the relationship Between the dead man and the alleged murderer's wife. Ashley is quickly sentenced to death but escapes When six mysterious men overwhelm the guards on the railroad car and start the doomed man on his miraculous escape.

Before solving the murder, Wilder transports us (as only he can) back into history and forward to two world wars, over the country and around the planet in a generational struggle for redemption. In this novel, which was a Number One Bestseller and a Book-of-the-month Club selection, Wilder blends together a poignant love story, a mystery thriller and nicely peopled family saga. It is an epic 20th century novel.

Kirkus Reviews closes by saying, "Poignancy is here, aphoristic charm, pleasant stretches of unabashed story-telling, and incidental riches. Unfortunately, the Christian humanism, the provincial earnestness on which everything rests seems both too decent and distant for our age." The New Republic closes by saying,

There is no question of sellout; Wilder is as sincere and enthusiastic as ever. But the art of the man who was once scolded for being too much of an artist has become simultaneously shriveled and bloated. The sad result is that, toward the end of his career, we have--from a man who has always meant well--a book that means nothing.