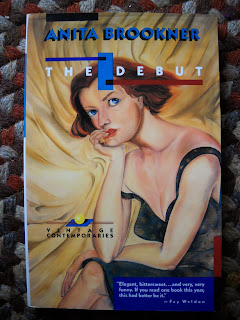 The Debut (originally published as A Start in Life) is the U.S. title of the 1981 novel by Anita Brookner. This was her first novel, though she had written some non-fiction before. I've read several books by her (including Hotel Du Lac (1984), The Misalliance (1986), A Friend From England (1987), Brief Lives (1990), and Fraud (1992)) and have others on my TBR shelf. I pick her work up whenever I find it, and I always enjoy them.

I am tempted by this book: Understanding Anita Brookner (from the Understanding Contemporary British Literature series) by Cheryl Alexander Malcolm. It's $30, though, so I'm sure I won't be yielding to that temptation. Reading more about Brookner would be fun, I think, but I guess I'll just focus on books she herself has written.

Since childhood Ruth Weiss has been escaping from life into books, and from the hothouse attentions of her tyrannical and eccentric parents into the gentler warmth of lovers and friends. Now Dr. Weiss, at forty, a quiet scholar devoted to Balzac, is convinced that her life has been ruined by literature, and that once again she must make a new start in life.

Dr. Weiss, at forty, knew that her life had been ruined by literature.

Ruth woke, as was her wont, at six and wondered how she was going to fill the day. With anticipation, of course. That is how most women in love spend their day. Frequently the event anticipated turns out to be quite dull compared with the mood that preceded it. The onus for redeeming the situation rests on the other person, who is, of course, in no position to know of the preceding mood. Thus both fail and both are disappointed.

Kirkus Reviews says, "Brookner writes with a fine, lean edge, and the pathos of the stunted middle-aged personalities here comes across with a dark, deadpan irony reminiscent of Bernice Rubens."