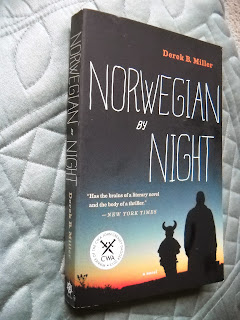 Norwegian By Night is the 2013 debut novel by Derek B. Miller, an American currently living in Oslo. The book won the Crime Writers Association New Blood Dagger award for debut novel. I liked everything about this book. The characters are well-developed, the plot is well-paced.... I look forward to his next books.

Sheldon Horowitz -widowed, impatient, impertinent- has grudgingly agreed to leave New York and move in with his granddaughter, Rhea, and her new husband, Lars. In Norway -a country of blue and ice with one thousand Jews, not one of them a former Marine sniper in the Korean War turned watch repairman. Not until now, anyway.

Home alone one morning, Sheldon witnesses a dispute between the woman who lives upstairs and an aggressive stranger. When events turn dire, Sheldon seizes and shields the neighbor's young son from the violence, and they flee the scene. As Sheldon and the boy look for a safe haven in an alien world, past and present weave together, forcing them ever forward to a wrenching moment of truth.

It's the dementia, Donny, said Mabel.
She didn't understand. She had other anchors to steady her. But he wanted to correct her all the same.
"How demented is it to have the past rush up to meet us just before the end? Isn't that the final act of the rational mind as it struggles to comprehend its step into the darkness? The last push for coherence before the great unraveling? Is that so mad?"


It occurs to him that he's spent so much time remembering his son's childhood that he has almost entirely forgotten his own. At his age it can be overwhelming and painful to harbor a thought accompanied by too much nostalgia. Not that he wanted to. Mabel, in her final years, had stopped listening to music. The songs of her teenage years brought her back to people and feelings of that time -people she could never see again, and sensations that were no longer coming. It was too much for her. There are people who can manage such things. There are those of us who can no longer walk, but can close our eyes and rmember a summer hike through a field, or the feeling of cool grass beneath our feet, and smile. Who still have the courage to embrace the past, and give it life and a voice in the present. But Mabel was not one of those people.


The eternal wisdom of the United States Marine Corps immediately returns to him in the voice of his drill sergeant. When you have only one option, you have yourself a plan!

makes the setting a powerful character as well. Hovering over the narrative is Norway's roundup of its Jewish population during the Nazi occupation —for which, the author points out, the nation didn't formally apologize until 2012.

Scandanavian Crime Fiction says, "Did I mention it’s incredibly funny? It is – in a gentle, sardonic, life-affirming way. And when it takes off at a gallop you can’t turn the pages fast enough. I suspect this will be on my top ten list for the year." Crme Scraps calls it "a brilliant book full of insights into life, love and loss" and one of the year's best.

Mysterious Reviews says, "it's nearly impossible to classify this book. Which to some readers will be its great appeal, a cross-genre, whimsically quirky, novel". Daily Kos says, "It is at heart, a novel of fathers and sons, as Sheldon wrestles with the guilt he feels for his encouragement of his son's enlistment during the Vietnam War which led to his death" and "It is the kind of book that stays with you when you reach the end, like the aftertaste of a fine wine."
Posted by Divers and Sundry at 4:00 AM