Duel in the Sun

As I was reading about the people involved in the making of the film I was struck by Tilly Losch, who plays Jennifer Jones' mother in this film. Losch was born in 1903 and was a ballet dancer with the Vienna Opera, studied modern dance and was a choreographer and stage actor. She worked in London and New York after she left Vienna in 1927.

Her first husband was a wealthy patron of the arts and founded a ballet company for her. This ballet company gave her the opportunity to work with George Balanchine and dance roles choreographed by him.

This marriage ended in divorce in 1934. I got a kick out of this story from Wikipedia about her first husband:


A permanent reminder of Tilly Losch could be seen at Edward James' former home at Monkton, on his West Dean estate. Her "wet" footprints were woven into the carpet on the spiral staircase. As Tilly emerged from the bath, leaving behind a trail of wet footprints as she ascended the spiral stairs, Edward subsequently commissioned the carpet with the motif woven into it as a token of his love for her. After their divorce Edward moved the carpet to West Dean House (now West Dean College, where it can still be seen) replacing it at Monkton with a similar carpet made with his dog's footprint.

Her first film was in 1936, but she was not offered leading roles and so she decided to focus on dancing, the stage, and on choreography.

She suffered a depression, gave up dancing, and entered a Swiss sanitorium. She met and married Henry Herbert, 6th Earl of Carnarvon in 1939 and took up painting in water colors and then oils.

Here's a photo of Losch holding one of her self-portraits: 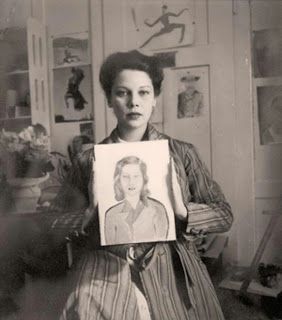 She had her first art exhibition in New York in 1944.

The marriage ended in divorce in 1947, but the divorce was amicable. They remained friends, and neither re-married.

Back to Duel in the Sun, Orson Welles narrates:


Duel in the Sun, two years in the making is a saga of Texas in the 1880s when primitive passions rode the wild frontier of an expanding nation. Here the forces of evil were in constant conflict with the deeper morality of the hardy pioneers; and here, as in the story we tell, a grim fate lay waiting for the transgressor upon the laws of God and Man. The characters in Duel in the Sun are built out of the legends of a colorful era when a million acres were one man's estate and another man's life was held as lightly as a woman's virtue. The character of the sinkiller is based upon those bogus, unordained evangelists who preyed upon the hungry need for spiritual guidance and who are recognized as charlatans by the intelligent and god-fearing.

Duel in the Sun.

Deep among the lonely sun-baked hills of Texas, the great and weather-beaten stone still stands. The comanches called it Squaw's Head Rock. Time cannot change its impassive face nor dim the legend of the wild young lovers who found Heaven and Hell in the shadows of the rock. For when the sun is low and the cold wind blows across the desert, there are those of indian blood who still speak of Pearl Chavez, the half-breed girl from down along the border, and of the laughing outlaw with whom she here kept a final rendezvous, never to be seen again. And this is what the legend says: A flower, known nowhere else, grows from out of the desperate crags where Pearl vanished -Pearl, who was herself a wild flower, sprung from the hard clay, quick to blossom and early to die.


It's on Martin Scorsese's list of films you need to see to know anything about film. DVD Talk calls it "a hugely enjoyable movie." Time Out calls it "a soaring extravaganza" and says it "has an absurdist magnificence that defies criticism." Rotten Tomatoes has a critics rating of 87%.
Posted by Divers and Sundry at 4:00 AM