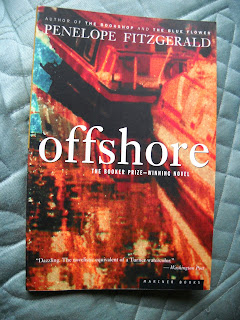 Offshore is the 1979 Booker prize-winning novel by Penelope Fitzgerald. I love the way this author makes you feel a part of the lives of characters you have nothing in common with. I have also read and enjoyed her novel The Bookshop.

On the Battersea Reach of the Thames, a mixed bag of the slightly disreputable, the temporarily lost, and the patently eccentric live on houseboats, rising and falling with the great river's tides. Belonging to neither land nor sea, they cling to one another in a motley yet kindly society. There is Maurice, by occupation a male prostitute, by happenstance a receiver of stolen goods, by nature a friend to all. And Richard, a buttoned-up ex-navy man whose boat, much like its owner, dominates the Reach. Then there is Nenna, a faithful, loving, but abandoned wife, the diffident mother of two young girls running wild in the waterfront streets.

It is Nenna's domestic predicament that, as it deepens, draws the relations among this scrubby community together into ever more complex and comic patterns. The result is one of Fitzgerald's greatest triumphs, a novel the Booker judges deemed "flawless."

There isn't one kind of happiness, there's all kinds. Decision is torment for anyone with imagination. When you decide, you multiply the things you might have done and now never can. If there's even one person who might be hurt by a decision, you should never make it. They tell you, make up your mind or it will be too late, but if it's really too late, we should be grateful.

The Telegraph says, "All Fitzgerald’s books are the product of maturity, reflection, the quickly touched depth of accumulated knowledge and long experience. Their creation reflects the new sense of opportunity that may come with the bereavements and displacements of later life." The Independent says, "Fitzgerald’s humour is gentle but aware, sensitive to ordinary human failings and the mess people inadvertently make of their lives in their attempts to connect with others, their need to feel less alone." Kirkus Reviews calls it "A quietly spirited little novel about people living on the edge (and at the end) of things".

The Guardian begins its review with this:

Penelope Fitzgerald has been compared variously to DH Lawrence, Evelyn Waugh and Martin Amis. Her admirers are drawn to Fitzgerald's sparseness of expression and her ability to trace the subtle social interactions between disparate characters, who often work or live together in small, offbeat communities. Offshore, which won the Booker prize in 1979, showcases her talent as a miniaturist.