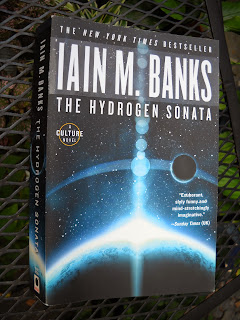 The Hydrogen Sonata is one of the Culture novels by Iain M. Banks. I'm partial to big, sprawling space opera, and this is one. No complaints here, except that the author has died. This is the last of the Culture series; there will be no more. I mourn that fact. You can read the first chapter at io9.


The Scavenger species are circling. It is, truly, the End of Days for the Gzilt civilization.


Always try to avoid setting up future opportunities for kicking yourself.


Living either never has any point, or is always its own point; being a naturally cheery soul, I lean towards the latter. However, just having done more of it than another person doesn't really make much difference.


..."one thing that does happen when you live a long time is that you start to realise the essential futility of so much of what we do, especially when you see the same patterns of behavior repeated by succeeding generations and across different species. You see the same dreams, the same hopes, the same ambitions and aspirations, reiterated, and the same actions, the same courses and tactics and strategies, regurgitated, to the same predictable and often lamentable effects, and you start to think, So? Does it really matter? Why really are you bothering with all this? Are these not just further doomed, asinine ways of attempting to fill your vacuous, pointless existence, wedged slivered as it is between the boundless infinitudes of dark oblivion bookending its utter triviality?"

"Uh-huh," she said. "Is this a rhetorical question?"

"It is a mistaken question. Meaning is everywhere. There is always meaning. Or at least all things show a disturbing tendency to have meaning ascribed to them when intelligent beings are present. It's just that there's no final Meaning, with a capital M. Though the illusion that there might be is comforting for a certain class of mind."


"Even without the intrinsic limitations of a conventional biological brain, what one forgets can be as important and as formative as what one remembers."


... obsession is just what those too timorous to follow an idea through to its logical conclusion call determination.


Sometimes you just had to adopt the attitude summed up by, Too bad.


"One should never regret one's excesses, only one's failures of nerve."

The Guardian says, "For all that the books are epic in scope and derangingly replete in detail, The Hydrogen Sonata reiterates a key theme: that personal fulfilment, in whatever form that takes, is rare and to be treasured." Kirkus Reviews closes its review with this,