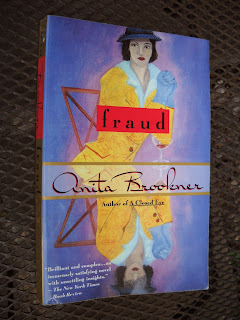 Fraud is a 1992 novel by Anita Brookner. I love this author and am quite pleased that she is not only prolific but is still alive. She was born in 1928. This book deals a lot with identity, sacrifice, aging, and mourning, and so there were sad moments for me; but it is an uplifting book -even inspiring.


At the heart of Anita Brookner's new novel lies a double mystery: What happened to Anna Durrant, a solitary woman of a certain age who has disappeared from her London flat? And why has it taken four months for anyone to notice?

As Brookner reconstructs Ana's life and character through the eyes of her acquaintances, she gives us a witty yet ultimately devastating study of self-annihilating virtue while exposing the social, fiscal, and moral frauds that are the underpinnings of terrifying rectitude.

There is tea throughout this book. And coffee. It's a thread than wanders from beginning to the very end, so I've decided to enter the book into the T(ea) Tuesday festivities at Bleubeard and Elizabeth's blog. Here's my favorite tea quote:


I am homesick, she thought with surprise. Homesick for that dark flat, which I have never much liked, homesick for my own chair and my footstool, for that brown kitchen teapot which I bought from Pelham Street (Beatrice swore that it made the best tea, and she was right: I often enjoyed a cup in the basement with her), homesick above all for my bedroom, so gloomy in daytime, so comfortingly womblike at night.

There are a couple of artworks mentioned. Degas's Jeunes Spartiates s'exerçant à la guerre is mentioned, as is Titian's Sacred and Profane Love:

There's a reference to a remark by Baudelaire "that he found it difficult to breathe when faced with a portrait by Ingres." There's a piece of a poem in French, which I had to google to translate; but it seems to be Paul Valéry's The Graveyard By The Sea:


After such arrogance, after so much strange
Idleness -strange, yet full of potency-


But there was too little to do when one was old, and feeling one's age, reluctant to venture further than the shops and the library, and then faced with a long afternoon at home. If she was at all nostalgic it was for her earlier vigour, when she had thought nothing of being out all day. She did not mind the silence, for she had come to cherish it, but there was a certain lack of human nourishment about her days that distressed her. Not excessively, for she was not an excessive woman, and not at all given to unnecessary regrets. She simply wished for the occasional conversation, the occasional stimulus of another personality. She was careful not to brood on this deficiency, but rather to face it squarely. She was, she knew, fortunate: she was not in need, did not depend on her children, had suffered no serious illnesses. Nevertheless she felt she was preparing mentally for her own death....

Those who love us are the most difficult to withstand.

The Independent has a spoiler-filled review and says, "Fraud, her 12th novel in 12 years, apparently conforms to everything that one has learnt to expect". The LA Times closes its review with this:

Fraud and denial, often yoked together, are indeed everywhere in life, and it takes a novel like this to show just how pervasive they are. "Fraud" sneaks up on you, delivering less than it promises in terms of mystery but more in terms of insight.