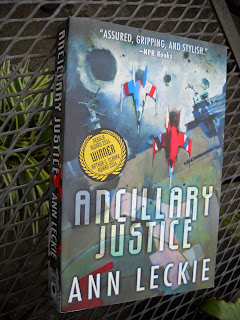 Ancillary Justice is the award-winning debut novel by Ann Leckie. Science fiction of the space opera sub-genre, it deserves its accolades. It's an interesting and involving story. This is first in an upcoming trilogy, and I look forward to reading the rest. You can read the 1st chapter at Leckie's site.


JUSTICE WILL COME TO THE EMPIRE
On a remote, icy planet, the soldier known as Breq is drawing closer to completing her quest.

Once, she was the Justice of Toren -a colossal starship with an artificial intelligence linking thousands of soldiers in the service of the Radch, the empire that conquered the galaxy.

Now, an act of treachery has ripped it all away, leaving her with one fragile human body, unanswered questions, and a burning desire for vengeance.

This book is everything that space opera should be: exciting, emotional, action-packed, and well-paced. The story hits the ground running–there’s no infodump to ground you in the politics or technology of the universe. Action is happening on page one, ... With such a grand background, it would be easy to lose the individuals in the midst of it or to use one-dimensional characters from central casting, but the story is full of strong characters...

Locus Online says, "This is not entry-level SF, and its payoff is correspondingly greater because of that." From NPR's review: "A space opera that skillfully handles both choruses and arias, Ancillary Justice is an absorbing thousand-year history, a poignant personal journey, and a welcome addition to the genre." io9 concludes, "This is a novel that will thrill you like the page-turner it is, but stick with you for a long time afterward". Strange Horizons begins its review with this:


Ancillary Justice is an astoundingly assured and graceful debut novel, wedding a complicated structure to three-dimensional characters and multiple interesting SFnal ideas. There's been a lot of award buzz surrounding it, all of which is entirely deserved. The novel's core questions, such as the meaning of personhood in a world containing artificial intelligences and the meaning of individual identity in a world containing multi-bodied minds, are not new to speculative fiction, but they are combined in ways which shed new light on them...

SFF Book Review says, "What a remarkable, memorable, thought-provoking novel." Kirkus Reviews calls it "an altogether promising debut."
Posted by Divers and Sundry at 4:00 AM