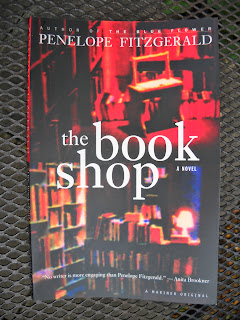 The Bookshop is a 1978 novel by Penelope Fitzgerald. This book was nominated for the Booker Prize in the year the winner was Iris Murdoch's The Sea, the Sea. Oddly, as it's a fun read, it's one of the saddest books I've ever read and a scathing indictment on the smallness of people in small towns. It's true that everybody who wants to be a big fish will find a pond small enough where they can be the biggest one of all.

I honestly cared about the main character.


In 1959 Florence Green, a kindhearted widow with a small inheritance, risks everything to open a bookshop -the only bookshop- in the seaside town of Hardborough. By making a success of a business so impractical, she invites the hostility of the town's less prosperous shopkeepers. By daring to enlarge her neighbors' lives, she crosses Mrs. Gamart, the local arts doyenne. Her warehouse leaks, her cellar seeps, and the shop is apparently ... haunted. Only too late does she begin to suspect the truth: that a town that lacks a bookshop isn't always a town that wants one.

Balzac, an expert on how nasty people can be to one another in small country places, once said that the ordinariness of human lives can never be a measure of the effort it takes to keep them going. Anyone who has found this to be true will admire Florence Green for her wit and her innocent courage, a courage that comes from simply choosing to survive.

She had a kind heart, though that is not much use when it comes to the matter of self-preservation.

Kirkus Reviews calls it "Pitch-perfect in every tone, note, and detail: unflinching, humane, and wonderful."
Posted by Divers and Sundry at 4:00 AM