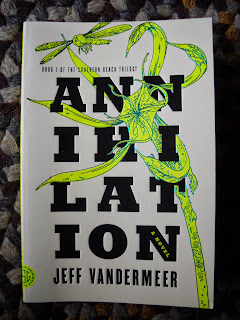 Annihilation is book 1 in the Southern Reach trilogy by Jeff VanderMeer. Here's an example of a page-turner where I got so involved in the book I forgot everything else. Fascinating world-building and involving characters... I already have the other 2 and almost hate to start them, because I will hate to finish them.

Area X has been cut off from the rest of the world for decades. Nature has reclaimed the last vestiges of human civilization. The first expedition returned with reports of a pristine, Edenic landscape; the second expedition ended in mass suicide, the third in a hail of gunfire as its members turned on one another. The members of the eleventh expedition returned as shadows of their former selves, and within weeks, all had died of cancer. In Annihilation, the first volume of Jeff VanderMeer's Southern Reach trilogy, we join the twelfth expedition.

The group is made up of four women: an anthropologist; a surveyor; a psychologist, the de facto leader; and our narrator, a biologist. Their mission is to map the terrain, record all observations of their surroundings and of one another, and, above all, avoid being contaminated by Area X itself.

They arrive expecting the unexpected, and Area X delivers -but it's the surprises that come across the border with them and the secrets the expedition members are keeping from one another that change everything.

some questions will ruin you if you are denied the answer long enough.

I have sought to avoid plot summaries or spoilers, because the manner in which VanderMeer builds his tale is of real importance to its effect and achievement; but I hope that in my quotations I've emphasized something of the supple, allusive elegance of his prose here. Annihilation is a large work which looks slight and reads swift. That, too, is the sign of a writer in complete command of his material.

Action-packed and mind-bending, this is a novel that will leave you pondering, but not because the mystery remains unsolved. Instead, it's because the mysteries of Area X raise all kinds of questions about what passes for "normal" in our own lives, from the bizarre ways we try to draw boundaries across ecosystems, to the kinds of broken organizations we task with making new discoveries about the world.

Kirkus Reviews calls it "Speculative fiction at its most transfixing." The Guardian and NPR and The Telegraph have positive reviews. EW calls it one of the "great weird books". Salon.com calls it "striking".
Posted by Divers and Sundry at 4:00 AM