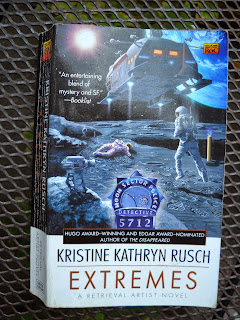 Extremes is #2 in the Retrieval Artist series of science fiction detective novels by Kristine Kathryn Rusch. I pick these up when I find them, but that's turned out to be a slow process. I like the concept. In this book, the point of view shifts from chapter to chapter, and the transitions are well done. The story itself is interesting. The characters are described well enough so it makes it easy to remember who's who, but not well enough so that I cared much about them as people. The plot moves along at a steady and then gradually increasing rate, and then there's an exciting conclusion. You don't have to enjoy science fiction to enjoy this book; just picture it happening in the Antarctic, and it makes just as much sense. It's a fun, quick read.

His name: Miles Flint.
His occupation: Retrieval Artist
His job: Find the Disappeared - outlaws on the run, wanted for crimes against alien cultures.
The catch: Flint isn't working on the side of the law anymore.

One simple mistake and a Disappeared could end up dead. But this time, the death of an ailing Retrieval Artist has caught Flint's attention. He suspects it was foul play, not a viral infection. Equally suspicious is a young woman's sudden demise during the Moon's prestigious Extreme Marathon. As Flint investigates, he finds an ominous connection. Both deaths lead back to a scientist. A scientist who is now one of the Disappeared.

The review at SFF.net concludes, "Read the book quickly without thinking much and I think you'll be entertained -- but pull on any of the dangling threads and the whole thing collapses." SF Revu hopes the series gets better after this 2nd addition.

I've read a short story by this author in addition to the following books from the Retrieval Artist series:

#3 Consequences
#4 Buried Deep
Posted by Divers and Sundry at 4:00 AM