Murder in the Marais 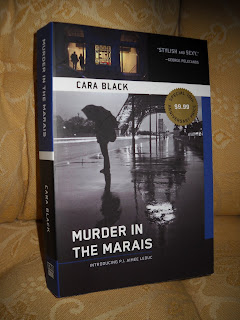 Murder in the Marais is the first in a mystery series by Cara Black featuring private investigator Aimée Léduc. This one is filled with Nazis -Nazi war criminals living under assumed identities, Nazi collaborators, neo-Nazis... I'm not a fan of literature about Nazis and only read this one because I was looking for something a bit different in a mystery and the Paris setting and the fact that it was first in a series appealed to me. Reading more in the series doesn't appeal to me.

Aimée Léduc has a bichon frise puppy named Miles Davis, a partner who is a dwarf and a father who died serving in the Paris police force.
Posted by Divers and Sundry at 6:30 AM