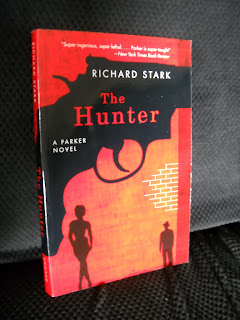 The Hunter is the first in the Parker crime series by Richard Stark. Published in 1962, it was followed by many others, the last of which came out in 2008. The author died in December of that year. This book is different from what I usually read. I have been looking in the mystery section for something a bit different, and this hits the spot. I have another in the series on my tbr shelf.

She shot him just above the belt and left him for dead. Then they torched the house, with Parker in it, and took the money he had helped them steal. It all went down just the way they’d planned, except for one thing. Parker didn’t die.

In The Hunter, the first volume in the Parker series, our ruthless antihero roars into New York City, seeking revenge on the woman who betrayed him and on the man who took his money, stealing and scamming his way to redemption. The volume that kick-started Parker’s forty-plus-year career of larceny -and inspired the motion picture Point Blank (1967), starring Lee Marvin– The Hunter is back, ready to thrill a new generation of noir fans.

The book has been recreated as a graphic novel, and the reviews I find are for that work and not for the original novel.
Posted by Divers and Sundry at 6:30 AM