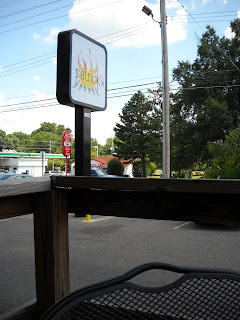 The Husband and I had a late lunch at Patrick's. I had never been here before, but he used to come once a week. He said they had the best chicken tenders in town, so that's what he ordered. I got the Patrick's Burger with sauteed onions instead of the onion slice. We each got house fries instead of the curly ones. I ordered the burger medium well and that's how it was cooked. That's always nice. The food was served in a timely fashion and was piping hot. Also nice. My hamburger was juicy without being hard to handle, and the bun held up just fine while I ate. The burger was so big I couldn't finish it: 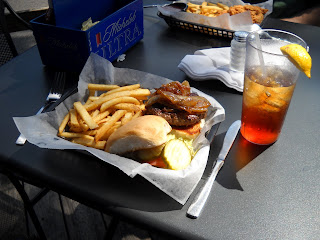 You can see the chicken tenders on the other side of the table in the picture above.

We sat on the patio, which turned out to be quite pleasant considering it was supposed to get up to 92F. The waitress was helpful but not intrusive and seemed to be enjoying herself. She remembered The Husband from the group he used to come with. She said she'd been there 10 years, so she's doin' something right. I appreciated that she asked if we wanted 1 check or 2 and didn't just bring the 1 check. 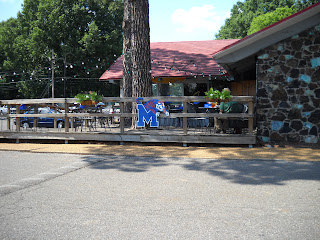 The Husband and I remember when the first restaurant opened at that site: the George Lindsey Steak House. My parents won dinners there and they took us out to eat, which was a treat and not something we did often. I don't remember when it closed or what all it's been since then, and I don't remember when Patrick's moved to that location.
Posted by Divers and Sundry at 6:30 AM