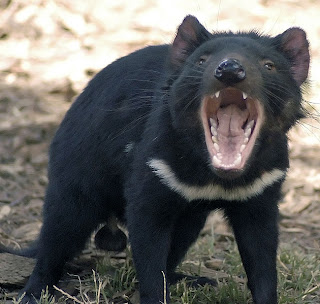 As long as I've been keeping track -however loosely- of this issue, they've been telling us that the lack of genetic diversity is a major factor in the Tasmanian Devil facial tumour disease (DFTD). Turns out that's just not so:

Researchers had thought that the lack of genetic diversity in the marsupials was a major factor in the disease. But, associate professor Kathy Belov, from the University of Sydney told Rachel Carbonell that in trying to prove the theory her team instead debunked it. -ABCNews The World Today

This disease was first described in 1996 according to Wikipedia, and is a contagious cancer. Wikipedia also says

At present the population has dwindled 70% since 1996. Numbers as of 2010 show an 80% rate of infection throughout the population. Six females have been found with a partial immunity. Breeding in captivity has begun to try to save the population.[8] It is spread by devils biting each other's heads when fighting over food.

The Save the Tasmanian Devil Program has more information.

The photo at the top of the post is from Wikipedia.
Posted by Divers and Sundry at 7:00 AM