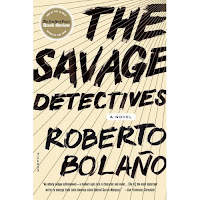 I picked up The Savage Detectives off the shelf at Davis-Kidd Booksellers because I found myself drawn to the life story of author Roberto Bolano. Born in 1953 and dead at age 50 waiting for a liver transplant, he moved from poetry to short stories and novels in his last decade of life to better provide support for his family. He spent most of his adult life as a drifter -one source describes him as a vagabond.

I had trouble getting into the book at first and almost laid it aside completely several times, but by the end I couldn't put it down. It grew on me. The novel is divided into 3 sections, with the first and third narrated by the same person and the middle -and by far the largest- consisting of a series of narrations by other characters.

from the back of he book:

In this dazzling novel, the book that established his international reputation, Roberto Bolano tells the story of two modern-day Quixotes -the last survivors of an underground literary movement, perhaps of literature tself- on a tragicomic quest through a darkening, entropic universe: our own. The Savage Detectives is a exuberant, raunchy, wildly inventive, and ambitious novel from one of the greatest Latin American authors of our age.

The pathos of The Savage Detectives lies in that single contrast—the pathos of the ardent young poets who cavort like satyrs and nymphs in the sacred wood of high poetry and, then again, have to drag their way around the hardscrabble streets of Mexico City, and sometimes die all too soon,... The Savage Detectives sings a love song to the grandeur of Latin American literature and to the passions it inspires


The New Yorker calls this book Bolano's "masterwork". The Guardian says, "The most important test that Bolano triumphantly sails through as a writer is that he makes you feel changed for having read him; he adjusts your angle of view on the world." The New York Times has a lengthy and positive review, saying, "The novel is wildly enjoyable (as well as, finally, full of lament), in part because Bolaño, despite all the game-playing, has a worldly, literal sensibility."

The photo at the top of the post is from Amazon.com.
Posted by Divers and Sundry at 6:30 AM