Should You Kill the Fat Man? 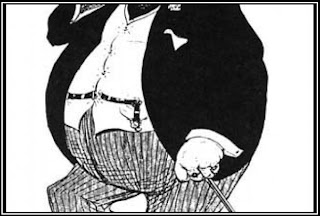 The Philosophers' Magazine has a quiz that presumes to judge the consistency of my morality. I wouldn't mind that much -really- if only their own responses didn't seem a bit inconsistent. At one point it notes my answer as being interesting but not contradictory while later noting that same answer as inconsistent. Apparently, to be consistent, I'm supposed to agree to let 5 people die on the track rather than 1 if I have control of where the train goes. That one alteration gets me a 100% score on consistency. I just see a difference between steering the train towards 1 rather than 5 and pushing the 1 in front of the train to save the 5. Even though the resulting number of deaths is the same either way. What I want to do is argue with the quiz and with the way the questions are phrased and with the assumptions they make, but I can't argue with a quiz. Well, I can argue with the quiz, but in taking both sides of that argument I'm not sure the quiz is getting a fair shake.

And what does "sum total of human happiness" mean, anyway?

They have other quizzes here.
Posted by Divers and Sundry at 5:00 AM