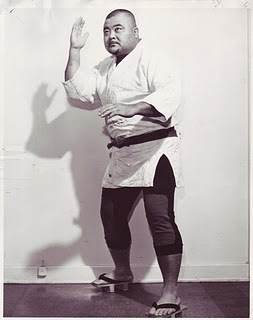 I wasn't a huge wrestling fan when I was little, but I did watch some of it on tv on Saturdays and was familiar with the major names of the day. Tojo Yamamoto was a major name back in the 1960's. Today is the anniversary of his suicide in 1992.


Obsessed With Wrestling has his title history. Memphis Wrestling History has a page that includes newspaper clippings from his career. The picture at the top of the post is scattered all over the web with no attribution that I could find.
Posted by Divers and Sundry at 5:00 AM