I am not a crook!

Those FBI warnings you can't skip on the DVDs I've spent good money on irritate me no end, so I got a big kick out of this image: 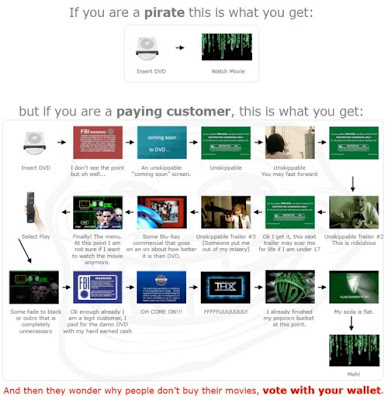 I especially identify with the caption that reads:

OK, enough already.
I'm a legit customer,
I paid for the damn DVD with my hard-earned cash.
When all I want to do is watch the frakkin' movie, why can't I just skip to that point without all the accusations that I'm a thief?

but by the time I see the warnings I've Bought The DVD Already! They are harassing the wrong people, I'm tellin' ya. The paying customer is not the one to hassle. If I had to read warnings about how it was illegal to steal clothing every time I got dressed, or wait for the finger to quit shaking in my face every time I wanted to open a food package, or listen to warnings about the evils of vehicle theft before I start my car each time it would make just as much sense. I'm sick of it! Send the criminals to jail. Fine. Just quit making life hard for the law-abiding DVD purchaser.
Posted by Divers and Sundry at 9:15 AM