The Spirit of Ed Wood Blogathon 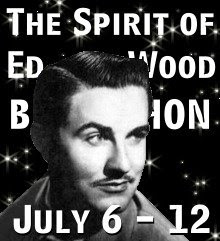 The Husband has been wanting the film Ed Wood for quite some time, so I'm using this Spirit of Ed Wood Blogathon as an excuse to buy it.

I'll link to my posts on Ed Wood films here:

Bright Lights Film Journal has an article on Ed Wood. FilmReference.com says he "typifies the ultimate in filmmaking independence." Images Journal says, "Surely any lousy, boring mainstream movie is worse than the constantly surprising, intensely weird, totally personal, never dull Wood films." Cinema Styles lays the blame for the bad reputation on Wood's writing, saying, "So why the reputation? It's all in the writing" and "it was his writing, his god-awful painfully awkward dialogue that did him in. Nothing can redeem the dialogue of Edward D Wood Jr."
Posted by Divers and Sundry at 5:00 AM