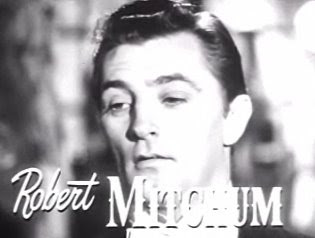 Today is the anniversary of the death in 1997 of Robert Mitchum, another long-time favorite of mine.

Here are the films I have posts on:

FilmReference.com closes by saying, "Although filmgoers have enjoyed this late bloomer's laconic presence for years, the critical and popular consensus has finally caught up with Mitchum's greatness as a screen star." Salon.com says, "Somehow he managed to be both cool and reckless, heroic and vaguely sinister, laconic to the point of inertia, yet still a man of action. And above all, he was tough." TCM and AMCTV have short biographies.


The photo at the top of the post is from Wikipedia.
Posted by Divers and Sundry at 7:00 AM