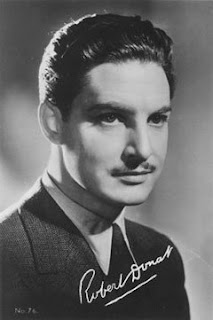 Today is the anniversary of the death in 1958 of actor Robert Donat. There are short overviews at BritishPictures.com, TCM and The Guardian. He has a Facebook page. FilmReference.com opens with this:

Robert Donat was one of the martyrs of the acting profession, a potentially great actor hampered by ill-health, which he resolutely strove to overcome throughout his career.

I'll add links to my blog posts as I see more of his films:

The picture above is from his Facebook album.
Posted by Divers and Sundry at 6:02 AM