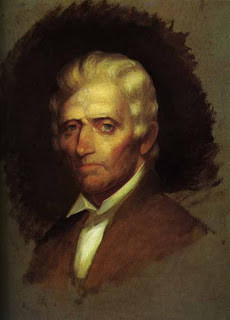 Today is the anniversary of the death in 1820 of Daniel Boone, frontier hero.

I have never been lost, but I will admit to being confused for several weeks.

There is a Daniel Boone Wilderness Trail that stretches through parts of Tennessee, Virginia and Kentucky. You can take a virtual tour of the Daniel Boone Homestead. The Daniel Boone National Forest is in Kentucky. A biography written by Thwaites in 1902 is online here. A purported autobiography can be read here. There is a 1936 movie based on his life:

Another film (1956) included Lon Chaney, Jr. as an American Indian. A Daniel Boone TV show ran from 1964-1970 and starred Fess Parker as the title character and Ed Ames as his Indian friend. Here's an opening credits clip from the series:

Fess Parker had a small role in the genre film Them!

Don Juan, Canto the Eighth
George Gordon, Lord Byron
LXI
Of all men, saving Sylla, the man-slayer,
Who passes for in life and death most lucky,
Of the great names which in our faces stare,
The General Boon, back-woodsman of Kentucky,
Was happiest amongst mortals anywhere;
For killing nothing but a bear or buck, he
Enjoyed the lonely, vigorous, harmless days
Of his old age in wilds of deepest maze.

LXII
Crime came not near him--she is not the child
Of solitude; Health shrank not from him--for
Her home is in the rarely trodden wild,
Where if men seek her not, and death be more
Their choice than life, forgive them, as beguiled
By habit to what their own hearts abhor,
In cities caged. The present case in point I
Cite is, that Boon lived hunting up to ninety;

LXIII
And, what's still stranger, left behind a name
For which men vainly decimate the throng
Not only famous, but of that good fame,
Without which Glory's but a tavern song--
Simple, serene, the antipodes of Shame,
Which Hate nor Envy e'er could tinge with wrong;
An active hermit, even in the age the child
Of Nature--or the Man of Ross run wild.

LXIV
'T is true he shrank from men even of his nation,--
When they build up unto his darling trees,
He moved some hundred miles off, for a station
Where there were fewer houses and more ease;
The inconvenience of civilisation
Is, that you neither can be pleased nor please;
But where he met the individual man,
He showed himself as kind as mortal can.

LXV
He was not all alone: around him grew
A sylvan tribe of children of the chase,
Whose young, unawakened world was ever new,
Nor sword nor sorrow yet had left a trace
On her unwrinkled brow, nor could you view
A frown on Nature's or on human face;
The free-born forest found and kept them free,
And fresh as is a torrent or a tree.

LXVI
And tall, and strong, and swift of foot were they,
Beyond the dwarfing city's pale abortions,
Because their thoughts had never been the prey
Of care or gain: the green woods were their portions;
No sinking spirits told them they grew grey,
No fashion made them apes of her distortions;
Simple they were, not savage--and their rifles,
Though very true, were not yet used for trifles.

LXVII
Motion was in their days, Rest in their slumbers,
And Cheerfulness the handmaid of their toil;
Nor yet too many nor too few their numbers;
Corruption could not make their hearts her soil;
The lust which stings, the splendour which encumbers,
With the free foresters divide no spoil;
Serene, not sullen, were the solitudes
Of this unsighing people of the woods.

Posted by Divers and Sundry at 6:17 AM