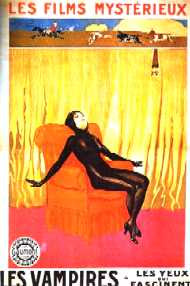 This is on the list of 1001 must-see movies I posted on earlier. I can see that I'll have to buy this book. The list is interesting, but it tells me nothing about why these particular movies are listed. I guess that's why lists aren't copy-rightable.


It is the anarchistic view of society, the supreme disregard of logic—so appropriate when the old social order of Europe was crumbling under the impact of World War I—which led André Breton and Louis Aragon to see in Les vampires "the reality of this century. Beyond fashion. Beyond taste."

The review at FilmsdeFrance.com says


Les Vampires is widely regarded as a masterpiece of the crime/thriller genre (made long before the genre had been established). The series has entered into French popular culture, providing a great inspiration to successive generations of writers and film-makers. Famously it had an impact on the surrealists, notably André Breton and Luis Buñuel, and also the New Wave film directors Alain Renais and Georges Franju.


A runaway hit in its initial release, which proved to be a major influence on the work of Fritz Lang and Alfred Hitchcock

I can't find this 10-part serial for sale on DVD, but it is in the public domain and is available online at Internet Archive and at youtube:


Other parts are also available online.
Posted by Divers and Sundry at 9:40 PM