The Day After the Martians Came 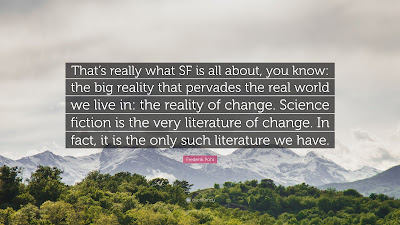 The Day After the Martians Came is a 1967 short story by Grandmaster Frederick Pohl, science-fiction writer/editor/fan whose career spanned 75 years and who died on this date in 2013 at the age of 93. You can read this story online at this link. "This story is about jokes and anxiety. Part of what makes it so brilliant is discerning between the two." It begins,

There were two cots in every room of the motel, besides the usual number of beds, and Mr. Mandala, the manager, had converted the rear section of the lobby into a men’s dormitory. Nevertheless he was not satisfied and was trying to persuade his colored bellmen to clean out the trunk room and put cots in that too. “Now, please, Mr. Mandala,” the bell captain said, speaking loudly over the noise in the lounge, “you know we’d do it for you if we could. But it cannot be, because, first, we don’t have any other place to put those old TV sets you want to save and because, second, we don’t have any more cots.”

“You’re arguing with me, Ernest. I told you to quit arguing with me,” said Mr. Mandala. He drummed his fingers on the registration desk and looked angrily around the lobby. There were at least forty people in it, talking, playing cards and dozing. The television set was mumbling away in a recap of the NASA releases, and on the screen Mr. Mandala could see a picture of one of the Martians, gazing into the camera and weeping large, gelatinous tears.

“Quit that,” ordered Mr. Mandala, turning in time to catch his bell-men looking at the screen. “I don’t pay you to watch TV. Go see if you can help out in the kitchen.”

“We been in the kitchen, Mr. Mandala. They don’t need us.”

“Go when I tell you to go, Ernest! You too, Berzie.” He watched them go through the service hall and wished he could get rid of some of the crowd in the lounge as easily. They filled every seat and the overflow sat on the arms of the chairs, leaned against the walls and filled the booths in the bar, which had been closed for the past two hours because of the law. According to the registration slips, they were nearly all from newspapers, wire services, radio and television networks and so on, waiting to go to the morning briefing at Cape Kennedy. Mr. Mandala wished morning would come. He didn’t like so many of them cluttering up his lounge, especially since he was pretty sure a lot of them were not even registered guests.

On the television screen a hastily edited tape was now showing the return of the Algonquin Nine space probe to Mars, but no one was watching it. It was the third time that particular tape had been repeated since midnight and everybody had seen it at least once; but when it changed to another shot of one of the Martians, looking like a sad dachshund with elongated seal flippers for limbs, one of the poker players stirred and cried: “I got a Martian joke! What’s worse than a martian tryin to fly a spaceship?

“A martian tryin’ to park one” said the reporter, folding his cards. No one laughed, not even Mr. Mandala, although some of the jokes had been pretty good. Everybody was beginning to get tired of them though, or perhaps just tired.

Mr. Mandala had missed the first excitement about the Martians, because he had been asleep. When the day manager phoned him about it, waking him up, Mr. Mandala had thought first, that it was a joke and, second, that the day manager was out of his mind. After all, who would care if the Mars probe had come back with some kind of animals? Or even if they weren’t animals, exactly. When he found out how many reservations were coming in over the teletype he realized that some people did in fact care. However, Mr. Mandala didn’t take much interest in things like that. It was nice the Martians had come, since they had filled his motel, and every other motel within a hundred miles of Cape Kennedy, but that was nearly everything about the Martians that mattered to Mr. Mandala.