Blood Simple is a 1984 neo-noir crime film directed by Joel and Ethan Coen (their directorial debut), and starring John Getz, Frances McDormand (her feature-film debut), Dan Hedaya, and M. Emmet Walsh. I watched it on HBO Max. This film is listed in the book 1,0001 Movies You Must See Before You Die, and I'm finding the films on this list to be well worth seeking out.

BBC says, "Intriguing, clever, and often surprisingly funny there's plenty to please in this thriller, that remains fresh and original." Roger Ebert says, "The genius of "Blood Simple" is that everything that happens seems necessary. ... Step by inexorable step, logically, one damned thing leads to another." Rotten Tomatoes has a critics concensus score of 94%.

This scene at the bar is from early in the film and came from Film Grab: 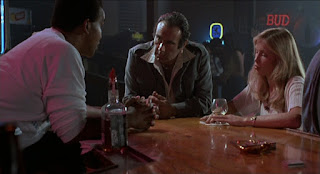 Please post something drink-related and join me at the T Stands for Tuesday blogger gathering hosted by Bleubeard and Elizabeth.
Posted by Divers and Sundry at 2:00 AM

Labels: 1001 Movies You Must See Before You Die, Film, film noir, Tea/Coffee, video