Timon of Athens is a play by William Shakespeare. You can read the play online here. This performance is by Seattle's Shakespeare in the Park Company from 1999:


Here's a drink-related screenshot from the feast scene: 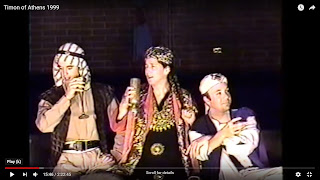 Raise a glass and join me at the weekly T Stands for Tuesday blogger gathering.

If you're interested in further exploration, here's a 20-minute video on Timon of Athens and the fickleness of one's personal political philosophy:

It has some background on the play itself, including a summary of the plot. He discusses current Trump-related political issues in light of the play. I think he puts forward a false equivalence with regards to the support of investigations into political figures, though, in ignoring whether or not there's legitimate grounds for investigation. I also disagree that being neutral on Trump is some kind of middle ground between loving him and hating him. I have a list of legitimate objections to Trump's behavior in office that don't require broad-stroke hate of him as a person. Current political views need discussing. I'm sure this man would make more sense to me in a fuller presentation.

Here's two minutes on intriguing facts about the play: