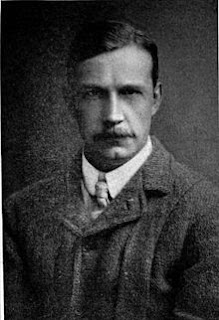 Rooum is a 1911 ghost story from the collection Widdershins by Oliver Onions. In it an engineer is pursued by an unknown, unseen presence. You can read it online here. It begins,


For all I ever knew to the contrary, it was his own name; and something about him, name or man or both, always put me in mind, I can't tell you how, of negroes. As regards the name, I dare say it was something huggermugger in the mere sound —something that I classed, for no particular reason, with the dark and ignorant sort of words, such as "Obi" and "Hoodoo." I only know that after I learned that his name was Rooum, I couldn't for the life of me have thought of him as being called anything else.

The first impression that you got of his head was that it was a patchwork of black and white—black bushy hair and short white beard, or else the other way about. As a matter of fact, both hair and beard were piebald, so that if you saw him in the gloom a dim patch of white showed down one side of his head, and dark tufts cropped up here and there in his beard. His eyebrows alone were entirely black, with a little sprouting of hair almost joining them. And perhaps his skin helped to make me think of negroes, for it was very dark, of the dark brown that always seems to have more than a hint of green behind it. His forehead was low, and scored across with deep horizontal furrows.

We never knew when he was going to turn up on a job. We might not have seen him for weeks, but his face was always as likely as not to appear over the edge of a crane-platform just when that marvellous mechanical intuition of his was badly needed. He wasn't certificated. He wasn't even trained, as the rest of us understood training; and he scoffed at the drawing-office, and laughed outright at logarithms and our laborious methods of getting out quantities. But he could set sheers and tackle in a way that made the rest of us look silly. I remember once how, through the parting of a chain, a sixty-foot girder had come down and lay under a ruck of other stuff, as the bottom chip lies under a pile of spellikins—a hopeless-looking smash. Myself, I'm certificated twice or three times over; but I can only assure you that I wanted to kick myself when, after I'd spent a day and a sleepless night over the job, I saw the game of tit-tat-toe that Rooum made of it in an hour or two. Certificated or not, a man isn't a fool who can do that sort of thing. And he was one of these fellows, too, who can "find water" —tell you where water is and what amount of getting it is likely to take, by just walking over the place. We aren't certificated up to that yet.

He was offered good money to stick to us —to stick to our firm— but he always shook his black-and-white piebald head. He'd never be able to keep the bargain if he were to make it, he told us quite fairly. I know there are these chaps who can't endure to be clocked to their work with a patent time-clock in the morning and released of an evening with a whistle —and it's one of the things no master can ever understand. So Rooum came and went erratically, showing up maybe in Leeds or Liverpool, perhaps next on Plymouth breakwater, and once he turned up in an out-of-the-way place in Glamorganshire just when I was wondering what had become of him.

The way I got to know him (got to know him, I mean, more than just to nod) was that he tacked himself on to me one night down Vauxhall way, where we were setting up some small plant or other. We had knocked off for the day, and I was walking in the direction of the bridge when he came up. We walked along together; and we had not gone far before it appeared that his reason for joining me was that he wanted to know "what a molecule was."

I stared at him a bit.

"What do you want to know that for?" I said. "What does a chap like you, who can do it all backwards, want with molecules?"

Oh, he just wanted to know, he said.

So, on the way across the bridge, I gave it him more or less from the book —molecular theory and all the rest of it. But, from the childish questions he put, it was plain that he hadn't got the hang of it at all. "Did the molecular theory allow things to pass through one another?" he wanted to know; "Could things pass through one another?" and a lot of ridiculous things like that. I gave it up.

"You're a genius in your own way, Rooum," I said finally; "you know these things without the books we plodders have to depend on. If I'd luck like that, I think I should be content with it."

But he didn't seem satisfied, though he dropped the matter for that time. But I had his acquaintance, which was more than most of us had. He asked me, rather timidly, if I'd lend him a book or two. I did so, but they didn't seem to contain what he wanted to know, and he soon returned them, without remark.

If you're interested in other weird tales and ghost stories and such that I've written blog posts on in the past, you can scroll through them here.
Posted by Divers and Sundry at 4:00 AM