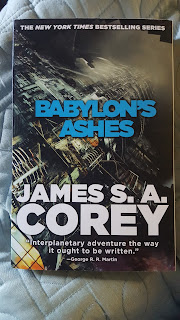 Babylon's Ashes (2016) is the sixth novel in the Expanse series by James S. A. Corey (pen name for a writing duo). I'm a huge fan of both this series and the TV series based on it, and this book doesn't disappoint. If you like space opera, you cannot do better than this. The series is a modern masterpiece and will survive re-reading alongside the classics of the genre. Like I said: I'm a huge fan. They should be read in order.

FIRES IN THE DARK

The Free Navy has crippled the Earth and begun a campaign of violence among the outer planets. The colony ships heading for the thousand new worlds on the far side of the alien ring gates are easy prey.

James Holden and his crew know the strengths and weaknesses of this new force better than anyone. Outnumbered and outgunned, the embattled remnants of the old politicl powers call on the Rocinante for a desperate mission at the heart of the gate network.

But the new alliances are as flawed as the old, and the struggle for power has only just begun. As the chaos grows, an alien mystery deepens. Pirate fleets, mutiny, and betrayal may be the least of the Rocinante's problems. And in the uncanny spaces past the ring gate, the choices for a few damaged and desperate people may determine the fate of more than just humanity.


Six books into the series and each novel feels fresh without repetitive retreads that can potentially plague long genre series. Equally as impressive at the least, and possibly more impressive as a tangent to that quality is the ability of the series to still surprise. As events unfold over the course of the novel and series, a sense of comfort sets in, the setting become familiar and the characters feel like old, beloved friends. Upsetting that sense of comfort is a skill that must be balanced with care and precision which is exactly how Corey manages to offset that level of comfort that comes across as a natural flow of the story rather than a bomb dropped in just for shock value.


Despite the multiple POVs, transitions are fluid throughout; the prose is clear, precise, and effortless; dialogue remains a true joy; the action is vividly taut; and the book evokes a full range of emotions, from sorrow (yes, characters will die) to laugh out loud humor. All the reasons this is my favorite science fiction series and why I picked it up and didn’t put it down again until I was finished later that night. My only complaint is it ended.