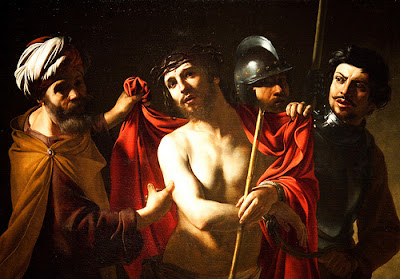 by Bartolomeo Manfredi, c/1612, oil on canvas. This is on permanent display at the Memphis Brooks Museum of Art.


Ecce Homo, meaning “Behold the Man,” depicts four half-length figures, a compositional structure Manfredi may have learned in Northern Italy from such artists as Mantegna and Bellini. Central to the image is the captive Christ, placed against the blood red of his cape (a symbol of his impending fate), a turbaned Pontius Pilate, and two flanking soldiers. The painted ledge, extending halfway from the left, is a reference to the slab on which the dead Christ will be laid out and which, after his death, will become a symbol of his sacrifice, the altar itself. This seemingly insignificant element forms a point of transition between the space of the viewer and that of the painting, thus making the beholder's involvement in the tragic scene all the more compelling.